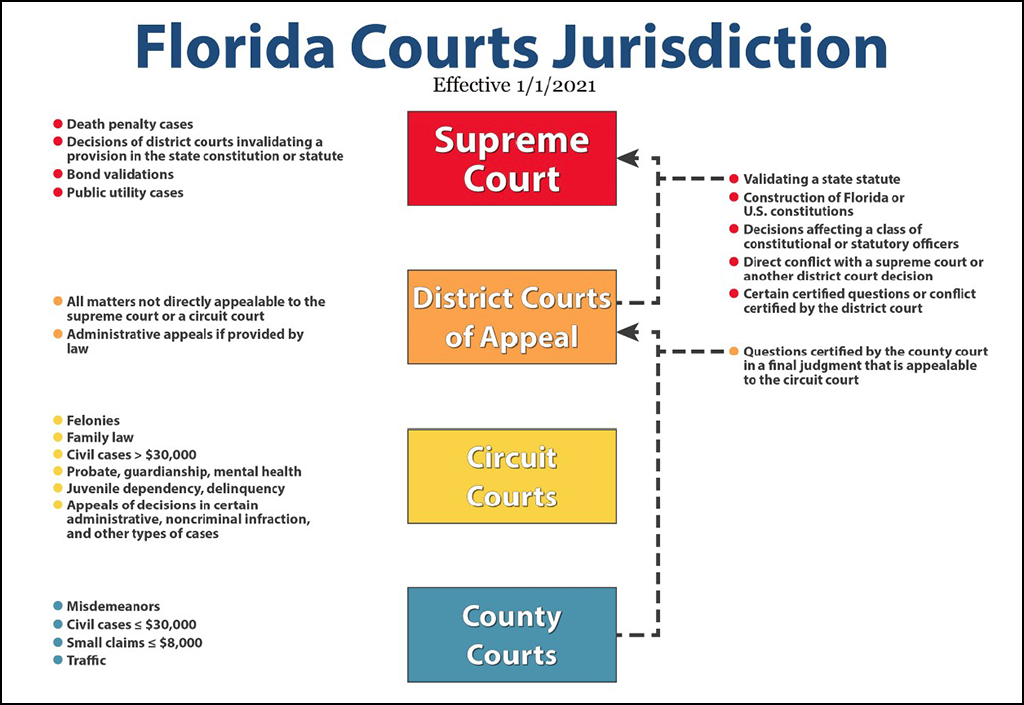 There are five district courts of appeal in Florida:

Decisions from the circuit civil courts go directly to one of these district courts of appeal.

So as a general rule, for all practical purposes, Florida’s five district courts of appeal are courts of last resort.

The House Judiciary Committee establishes the Federal Rules of Appellate Procedure, which we often must use in conjunction with the local rules of the federal circuit courts of appeal. We have extensive experience before the federal district courts and circuit courts of appeal, including the Eleventh Circuit Court of Appeals, the governing federal circuit for Florida.

At trial, an attorney’s major objective is to persuade the fact-finder—typically a panel of lay jurors—that credibility lies on the side of his or her client’s witnesses, and the evidence, although controverted, favors his or her client. Trial lawyers ascertain the factual strengths and weaknesses of both sides of their cases, and then sift, select, and evaluate the evidence to be presented. To be successful, the trial lawyer must build a convincing argument from an amorphous mass of testimony and create an aura of righteousness around client and cause.

STANDARDS OF REVIEW IN APPELLATE COURTS

The appellate lawyer, by contrast, deals primarily with the law, not the facts; he or she argues to judges, not to lay juries. The focus of the appellate specialist is on legal argument, through written and oral advocacy. Broadly stated, appellate practice involves the practice of law before appellate courts. The function of appellate courts is, of course, to review the decisions of lower courts to determine if reversible error has been committed. Such review involves the interpretation and application of the law to a given set of facts.

Appellate judges are different from trial judges. Judges on appeal don’t reweigh facts, or judge credibility of witnesses. The job of the appellate court is to determine if legal errors were made in the trial court that were harmful and affected the outcome of the case. If the appellate court is convinced harmful error occurred, the judgment can get reversed.

In the appellate arena, there exist several procedural “landmines” which, as a general rule, are more easily navigated by the experienced appellate practitioner. The answers to many procedural dilemmas that arise cannot always be found in the Florida Rules of Appellate Procedure; often, such answers may be derived only through experience in the workings of the state appellate process, as well as an understanding of the case law and the local rules of each court. Potential “landmine” issues that can cause serious problems for the average practitioner include the following:

1) What constitutes “rendition” of an order for purposes of taking an appeal?

2) What post-trial motions toll the time for taking an appeal?

3) Which interlocutory orders are appealable as “appealable nonfinal orders”?

4) Which interlocutory orders are proper subjects of petitions for writ of certiorari, petitions for prohibition, or other extraordinary writs?

6) What is a final order subject to appellate review?

7) Does a motion for rehearing (or motion for reconsideration) ever toll the time for taking an appeal from an interlocutory order?

“It’s never over until it’s over.” At least until you’ve exhausted the appellate process and your post-trial remedies.

And if something happens after a final judgment, like mistakes; inadvertence; excusable neglect; newly discovered evidence; or fraud, you may be able to file a motion for post-judgment relief and vacate that final judgment.

Appeals can also be very helpful before a judgment is entered. There are many orders that can be challenged before the case has concluded without a judgment – such as those orders that

(i) the jurisdiction of the person;
(ii) the right to immediate possession of property, including but not limited to orders that grant, modify, dissolve or refuse to grant, modify, or dissolve writs of replevin, garnishment, or attachment;
(iii) in family law matters:

(D) grant or deny the appointment of a receiver, and terminate or refuse to terminate a receivership.

And then there are extraordinary writs. These are possible when you want to challenge certain pre-trial rulings. For example, you can use a petition for certiorari to protect you from having to disclose confidential, privileged, or trade secret information in the discovery process.